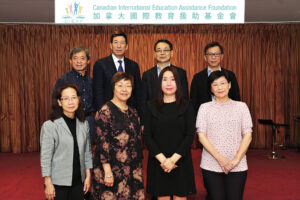 Mr Tom Mah is the owner of Continental Seafood Restaurant, one of the biggest and well established restaurant in Richmond. Mr Mah also oversees it’s daily operation. Before joining the restaurant industry, Mr Mah was educated and had worked in the computer and information technology field from the seventies to the mid eighties. Mr Mah is known by his integrity in business and his generosity in charitable and social activities. He is also active in various social and non-profit organizations which includes the Richmond Mandarin Lions Club.

Ms Heidi Xiao was born in Hunan Province of China. She learnt music and lute playing since her childhood and soon became a national music performer. She also started her commodity trading business and achieved significant results as China’s economy developed the same time. Ms Xiao immigrated to Canada to focus her effort in her daughters’ education and daily requirement. She has been involved in various community works during her spare time.